The National Eagle Center just released the results of its 2022 Golden Eagle survey which had 195 volunteers devoting over 600 hours and driving over 7200 miles covering the area of southeast Minnesota, western Wisconsin, eastern Iowa, and northwest Illinois.  The number of Golden Eagles was down slightly at 99.  However, the number of Bald Eagles was the second highest recorded in the eighteen years of the survey at 1643.  That is a good number.

What particularly caught my attention was the number of Red-tailed Hawks at 866 and Rough-legged Hawks at 199, the highest numbers of each they have recorded in eighteen years!  Have you seen a Rough-legged Hawk?  I have only seen four; they are quite rare to see.  When they spread their wings, their underside looks to me like a Native American Chief’s headdress.  They are the only hawk with feathers all the way to their ankles.  The sight is spectacular!  They are very powerful flyers.  One I released flew so far before landing that he was just a speck in the distance.  I am always concerned during release that the bird lands.  That one was a challenge to follow.

Look up and see the beauty of these amazing flyers.  I’m including a picture so you know what to look for.

Thanks for caring about the critters, 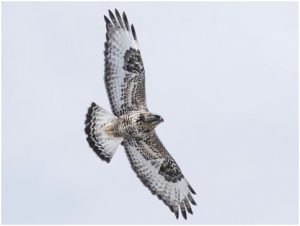