A couple weeks ago about 7:00 one evening, Alice, Elizabeth’s neighbor, called and urged her to come over.  “One of the great-horned owls Patti released is here,” she shared. “Hurry.”

Elizabeth immediately drove over, but when she arrived, the owl had moved.  Several crows had been making quite a disturbance around the owl, and it had shifted locations.  In the meantime, Alice had captured pictures of it, one of which is below.

I never know if an owl I release will stay in an area or not.  I am thrilled to hear this one might be doing so.  Alice is more excited than me.  She has seen the owl again in the weeks since that incident.  She has high hopes that the second one I released may be hanging around and they may be a breeding pair.  I am not certain of either one’s sex, although I sometimes guess by their size.  Usually the females are larger.  However, assessing the sex of an animal I am rehabbing is my last concern.  It is difficult to do and not important in their recovery.

Alice was reminded of Sharon and sent a donation in Sharon’s honor.  Thank you, Alice, for your enthusiasm about the critters and for helping with a donation.  It is much needed. 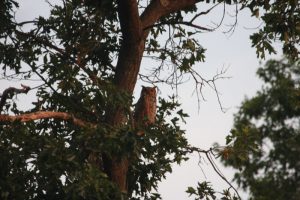